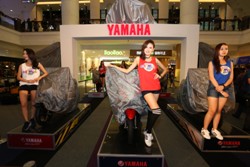 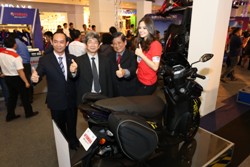 The new model launch luncheon was held in conjunction with the Yamaha Automatic World Motorshow, which was held in Berjaya Times Square mall.

During his launch speech, Dato’ Jim Khor, Managing Director of Hong Leong Yamaha Motor Sdn. Bhd. said, “The objective of the Yamaha Automatic World Motorshow is to promote the automatic segment, which will one day be the commuter of choice and the motorshow is a sneak peek into the future of motorcycle commuting.”

The all-new Yamaha Ego Avantiz is powered by a 125cc Single OverHead Camshaft (SOHC), Fuel Injection, Air-cooled BLUECORE technology engine, which delivers an exciting and fun ride to the avid motorcyclist. The BLUECORE engine delivers sufficient power to thrill the fun-seeker and yet provides the economy of a fuel efficient vehicle. In keeping with Yamaha’s core values of innovation, a new technological feature, the “ECO” lamp incorporated into the meter panel was designed into the bike with the sole purpose of indicating to riders an efficient riding pattern. A new parking lock system is also introduced to improve the overall safety feature of the automatic model.

The all-new Yamaha Ego Avantiz bike also comes with an array of features that include:

1) An aggressively styled and adjustable LED headlight for brighter illumination

3) An ergonomically designed seat handle, which will ease the pillion rider grip for a safer ride.

5) A stylishly designed exhaust system that provides an aggressive styling to the overall vehicle.

The new automatic model comes in aggressive styling, which will complement the lifestyle of the modern and trendy riders. Three colors will be introduced to the marketplace in the attractive range of aggressive black, speedy blue and raving red, and will be priced competitively with an estimated recommended retail price of around RM 5,700 (inclusive GST), which is subject to approval from relevant authorities.

“This bike has a lot of features that will definitely excite the market” ensured Dato’ Jim Khor. The all-new Yamaha Ego Avantiz is set to hit our roads and will be made available at all our authorised Yamaha dealers nationwide from end August 2016. The public will be able to view, touch and feel the all-new Yamaha Ego Avantiz at the Yamaha Automatic World Motor Show 2016 currently being held at the Concourse area, Berjaya Times Square KL from the 22nd to 24th July 2016.